An art show entitled Deconstructing Borders can today no longer slink by unnoticed. Its very syntax is potent; thick and heavy with political, economic and moral significance. Regardless of whichever side one inhabits in this divisive, contemporary debate, the concept of the border is a loaded one.

Two months into 2017 and it’s the buzzword of the year. And an era of unbridled border construction is already well underway. As refugees come to a halt in the ramshackle jungles of Calais and Trumpian travel bans cull movement in the Land of the Free. Israeli laws legalize settlements  in disputed lands, and a paranoid North Korean military flexes its muscles at its southerly neighbours. And all the while, the era of contruction shrewdly rewards those at its frontline, firing up the shares and boosting the profits of the barrier-building security companies taking on this lucrative trade.

After a brief spell of eased, European movement, geographical borders are back with a vengeance, slick and oiled by the latest versions of old sentiments that have been lying dormant, patiently waiting. And the self-deluded claims of harmony and solidarity drift callously away like a post-EU Britain.

At the Museum Frieder Burda, select works of Sigmar Polke collide with Alicja Kwade‘s 2016 sculpture Reality Zones. Polke’s 1984 Amerikanisch-Mexikanische Grenze (American-Mexican Border) forms the starting point for the Berlin show. Its glowing, yellow rendering of a newspaper image breaks through the surface of the recent past with restored urgency. Polke’s body of creative work arose from within a deeply divided, mid-20th century Germany; a division that surpassed geography to become something much deeper, much more personal and psychological. A wall that cut through homes, into families, into the lives of the unborn. Slicing through flesh to latch onto bones and fibre, infiltrating the deepest pits of identity.

In the same way, Deconstructing Borders moves beyond the folds and crevices of our maps, unearthing the entrenched borders that cut deeply through our lives. Kamp’s curatorial stitching together of past and future reminds us of our existence inside this crater, caught between its two temporal borders. We peer backwards at the wall and border watchtowers of Polke’s time; tracing its legacy through the first half of the 20th century. Examining why it emerged there in the first place, and how it’s iron cold grip lurked out across the rest of Europe, slicing it in two. And then we look forward, wondering what we might have learnt from such collective narratives and what we will do with such knowledge. As contemporary artist Alicja Kwade claims, “at any moment, we are in the middle of all the possibilities of our life.”

In her 2016 sculpture Reality Zones, Kwade addresses this far reaching ubiquity of time. A delicate chain of interlocking bronze rings tumbles down from the ceiling and spills across the gallery floor, each shining link modelled on the Earth’s longitudinal lines. It is the system of standardised time-  of zones, rules, divisions and measurements-  imposed upon the Earth’s graceful curvature since the 18th century. Back when the very first railways, with their fresh promises of freedom and movement, heralded in a conventional method of timekeeping. Dividing up the world into zones, upon which all of our shared economic and societal structures were to be built. 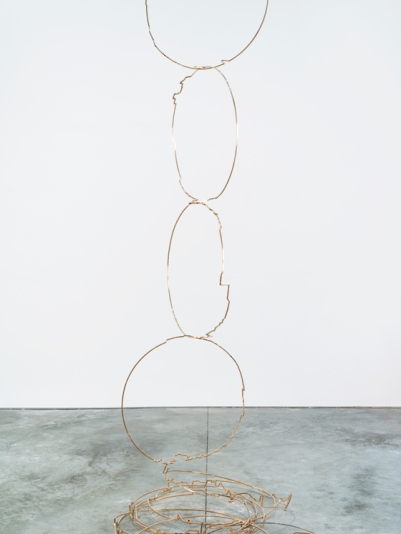 Such was a time of monumental transformation, as pioneering machinery began to reveal the limits of humankind’s field of perception. Speeding trains contorted the world into a blur of shapes and aerial photography flattened the world with a definitive squash. Vision, it was now clear, involved a mosaic of multiple relationships, none of them fixed. Previous ways of seeing were merely an ideal view, a “generalisation” about experience. An arbitrary convention of vision.

And such ideas still resonate today in Kwade’s work, where she prods and digs  deeply into existing systems of perception;  those that are accepted as social agreements and universal truths. Those that constitute reality. As Kwade explains in an interview with Contemporary Lynx, her works question why the world is the way it is, who creates the “reality” we see before us, and how we contribute to this progress. In her decision to represent the world as demarcated splices of time, she has merely honed in and elevated one single aspect of the world’s multifaceted reality, choosing it “at random” as her guiding principle.

Back in the midst of the 20th century, as military watchtowers enjoyed an omniscient vantage point across East and West Germany (one denied to its inhabitants), Polke was busy experimenting with photography and paint. Fuelled by a way of life dominated by restrictions and boundaries, he was devising new ways to make images and colors shift or vanish, depending on the angle from which they were viewed. Inspired by examples of the new American Pop art, his early works throughout the 60s exploited and played with the dots used to print images in newspapers and magazines. Pop art’s emphasis on methods of mechanical reproduction highlighted the idea that all forms of communication, all messages, are filtered through codes or languages, rooted in fallibility, bias and convention.

Yet unlike the clean, crisp dots of Roy Lichtenstein, Polke’s were often less precise, more fuzzy and unclear. He was finding his own ways of subverting and bringing into question the apparent truth, validity and purpose of the media images that his paintings appropriated. His investigations into such areas further developed into the 70s, when he began experimenting with the photographic process, combining negatives and positives to “alter reality.”

But what message do these dots carry today, that hasn’t already been delivered by artists of the 20th century? Never before has our view of the world been as perceptually clear as it is today. It is streamed into our homes with visual precision and clarity, no longer plagued by the pixelated graininess and fuzz of the previous century’s transmissions.

Yet this sharpness of image is confounded by the murky film clinging obstinately to its surface; a muddling of fact and fiction, perpetuated by the democratisation of the medium through social media, blogging and alternative news outlets. What at first seemed a welcomed escape route from the echo chambers of our carefully curated, ideological comfort zones has spiralled suddenly out of control. The time worn traditions of satirical news have been carelessly undressed, stripped of their ironic attire, and propagated offline, online, in-line with blind zealousness and meddlesome mischief makers. It’s such a bewildering mess that even traditional news outlets no longer seem all that able to isolate fact from fiction. Experts once turned to for specialist advice bring nothing but hidden, political agendas. Universities are lambasted as caves of liberal quack, hell bent on perpetuating the elitist status quo, desperate for EU funding and cushy ivory towers. And supporters of the free market are all cold-blooded bigots, racists, xenophobes – each and every one.

In this so called “post-truth” world,  we spend our days gleefully calling out the “Fake News” of our neighbours. Crowds gather angrily in campus corners, fingers plugged in their ears, brandishing placards like an ancient ritual aimed at dispelling alternative perspectives from view. Out of sight, out of mind. In an age overflowing with information, we realise finally we can longer surf the wave unscathed. We retreat, our vision returning to its earlier myopic state. No longer can we hack all the open space into which so many different ideas flood; not when we are unable to shake off the preconceptions and beliefs we’ve brought there with us. So we put our borders back up and retreat into our homely interiors, our echo chambers, our carefully curated, ideological comfort zones. Even though we know they are nothing more than granulated pixels, nothing more than randomly curving golden rings hanging from a ceiling.